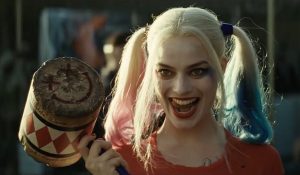 I watched “The Suicide Squad” last night, I went with Matt my brother in law.

The part of the movie that stood out the most to me was how the Joker and Dr. Harley Quinn (played by the rather attractive Margot Robbie 🙂 hooked up.

Now this guy is a total psychopath with no conscience mind or sympathy,
who was locked up in Arkham Asylum for brutally killing men and women…

…torching them, blowing them up and tossing them out of 15 story buildings while laughing until their bones and guts paint the highway.

So when they finally caught him, thanks to Batman’s help.

They tossed him into Asylum where all the other crazies went in Gotham City.

In the Asylum, he had daily therapy sessions with a hot blonde psychiatrist named Dr. Harley Quinn

So as time went by their sessions start to get more intense with each other.

I mean, she would start to fantasize about getting it on with the joker

The roles were switched immediately!

She became his patient and he became her psychiatrist.

Harley Quinn could no longer fight her curiosity.

It finally got the best of her to where she couldn’t even resist him anymore, so in the movie they get crazy with each other

From that moment on, she was deeply in love with the Joker.

Even though she knew he was a killer, psychopath and whatever else you want to call him.

He made her fall so deeply in love with him, that she helped him escape the Asylum.

If that’s not the definition of making the sale, I don’t know what is!

Amazon has developed a relationship with you

They’ve built a strong relationship with hundreds of millions of people!

All ready to fall in love with you and your product

And the best part is, you don’t have to become a psychopath or a serial killer.

You can do this by just being yourself.

Let me show you how to start today