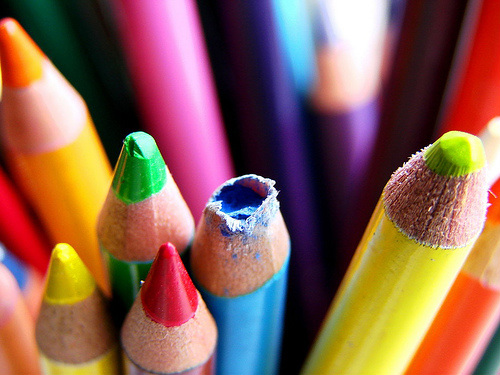 If you’re a small business owner or entrepreneur, being unique is a big deal.

You want to be more desirable to your prospects than anyone else who’s offering what you’re offering. You want to stand out. But you may have noticed it’s harder than it sounds. Unless you’re in a magical new market, there are already lots of people doing what you do.

You can try to:

This all makes standing out rather hard. So what in the blue blazes do you do?

If you prefer to read than listen, check out the original post by scrolling further down this page. If you’re a small business owner or entrepreneur, being unique is a big deal.

You want to be more desirable to your prospects than anyone else who’s offering what you’re offering. You want to stand out.But you may have noticed it’s harder than it sounds. Unless you’re in a magical new market, there are already lots of people doing what you do.

You can try to:

This all makes standing out rather hard. So what in the blue blazes do you do?

You Can’t Follow the Standard Advice, That’s for Sure

Business old schoolers (and plenty of GURU’s) tell you you’re supposed to develop a Unique Selling Proposition, or USP. They tell you to pick a benefit that’s different from what the competition is offering and dominate it. They tell you to advertise the hell out of it, to the point where you own that segment of the customer’s mind.

Sounds great, but there’s only one problem:

The idea for the USP was invented in the 1940s to explain the success of advertising campaigns. Back then, there were substantially fewer advertisers than there are now, and it was much easier to find a unique benefit.

Not anymore. Now, the world is saturated with advertising, and simply being unique isn’t enough. If you want to succeed, you need to go one better and develop something that will make you stand out as more desirable than any USP ever could:

The Next Generation of the Unique Selling Proposition

Original Mad Man David Ogilvy called it a “big idea.” He applied it specifically to advertising—but it works for all kinds of marketing platforms, especially websites. He said:

You will never win fame and fortune unless you also invent big ideas. It takes a big idea to attract the attention of consumers and get them to buy your product. Unless your advertising contains a big idea, it will pass like a ship in the night.

“Big idea” sounds kind of vague to me, and also a bit grandiose. So I call it a concept—because that’s exactly what it is: a central theme or idea which binds all of your marketing together. It forms a kind of foundation for your marketing identity…and makes you desirable to your prospects in a way that nothing else can.

But you can’t just use any old theme or idea. You need some very specific elements. Four, actually…

It may not be sufficient, but it is necessary.. That’s good news if you’ve been reading this thinking, “But Neil, I already have a USP that works well for me! Are you saying it’s no good?!”

No sir ee bob, I sure ain’t. It’s perfect. But you can turn it into something even better, that’ll pull in prospects even harder. Most unique selling propositions are just “big ideas” waiting to be set free.

If you don’t have a USP, well don’t worry. You can create a concept without one. I did. In a way, it’ll become your USP—but not as you’d traditionally think of one.

This is the one thing most unique selling propositions are missing. Add it into the mix, and you’ve got yourself a stellar motif.

And if you haven’t got a USP to work off, don’t worry. Stories are everywhere. You can turn even the most boring things into gripping stories with a little bit of application. You probably have a dozen great stories up your sleeve right now, just waiting to be told, and don’t even know it.

Let me give you an example.

Have you heard of our digital marketing agency client progressive property? No? Go ahead and check out their website.

One of their core values is “quality built to last.” Not exactly a unique claim, eh? How many companies say something similar? It’s decidedly non-unique-selling-propositionish.

But look how they turn this generic value into a concept. Check out their headline:

“Building & Managing a completely Hands-Free Property Portfolio That You Can Retire on, Enjoying Financial Independence for the Long Term”

Built to last? Check. It’ll create an income you can retire on…that’s longevity!

Concept? Check! How can you resist a done for you property building portfolio that you can retire on?

This is a great concept. Notice how it puts a unique angle on an otherwise ordinary claim, while at the same time implying a story that engages your imagination.

What makes stories so mighty? Well, they play into some very powerful psychological triggers:

Another thing you’ll notice about progressive properties concept is that it’s all said in a single sentence. This is another thing that sets motifs apart from other kinds of ideas. They must be simple. The best motifs make natural headlines, because they can be stated or summarized in a sentence or two.

Now, you gotta be careful here. If you read any good marketing authorities (Drayton Bird or Gary Halbert, for example), you’ll know that headlines should emphasize real benefits. They should pass the “so what” test, or the “forehead-slap” test. And if you’re working out a headline that isn’t going to be used in conjunction with a picture, that’s good advice.

But remember, a motif must contain a story.

It doesn’t have to contain a benefit (although it’s a good idea). David Ogilvy created some outstandingly successful campaigns with headlines like “The man in the Hathaway shirt” and “The man from Schweppes is here.”

Not strong headlines by themselves—but he coupled them with intriguing pictures that made reading the ad copy irresistible. A similar approach could work brilliantly on your website.

Whichever way you go, the point to remember is that a motif is simple. It should capture just one idea, and evoke one primary emotion in your prospect.

Everything is unique in some way—and the mere fact that your motif is also unique does nothing to ensure its success. It must go beyond uniqueness and surprise your prospect. When he first comes across it, he should pause for just a moment—and then experience a tiny thrill.

Now, be careful. There’s a huge, inept industry in advertising built around being shocking or funny—as if entertaining people will provoke them to buy things.

The surprise of a great concept is not that kind of surprise. Rather, it comes from an unexpected combination of ideas. For Progressive Property, it’s in taking a common guarantee and extrapolating it into a provocative picture. Finding a way to juxtapose two ideas is the first step in coming up with a mighty motif.

Which brings me to my final point.

How To Invent and Use a Concept

Developing a concept for your marketing, and putting it into use, is a topic unto itself. I’d do you an injustice to try to cover it here—so in a future post, I’ll cover it in depth, with practical examples. Look out for it in a week or two!

Want top get my team and I to look after your online markleting? Then why not get in touch for a tailored quote