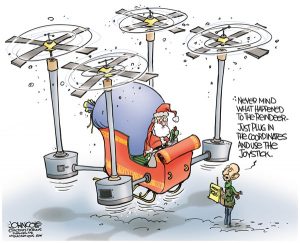 I know it’s Christmas night and you probably want to go to bed early tonight (I do too!) but I HAVE to tell you about this crazy little guy who showed up at my door tonight.

He was short, about 4 feet tall.

He also had weird shoes that curled at the toe.

And even more weird, he had pointy ears.

I asked him who he was and he said he was a messenger elf from Santa!

Apparently, Santa is getting older and slower, and he’s concerned about his retirement plan.

So he wanted my advice.

Can you believe that?

So here’s what I told this messenger to tell Santa:

I told the messenger to tell Santa to start selling his own branded stuff on Amazon, santa toilet paper would be a big hit don’t cha think 😀

When going to down chimneys and seeing plate of cookies and a glass of milk, ignore it! And instead, leave a note next to them saying next year he’d prefer to be left fruit or maybe some meat and cheese, instead.

And instead of milk, I told him to ask for water.

If he needs advice, he should check out the Aussie Online Entrepreneurs:

Santa spends way too much time delivering stuff, Amazon could do all his deliveries for free! Now that’s LEVERAGE baby!
http://roarlocal.com.au/aussie-online-entrepreneurs

I said to tell Santa this is NOT a get rich quickly thing.

It’s based on the same stuff all the Aussie Online Entrepreneurs are doing to set themselves free, so it’s not magic (no using his elves to get stuff done) but it does work.

Santa’s current system is too restrictive 😀

What about all those adult gifts that he delivers, I’m sure we all like the naughty ones much more 😉

All those elves are dead weight.

And by trimming his workforce down, he’ll also trim his overhead down, too, because he’ll be forced to roll up his sleeves and do more work.

Anyway, so that’s that.

This is the plan I have for Santa.

Have a GREAT Christmas.