Want to be a YouTube sensation with your own viral video?

Then buckle up to the ROARlocal guide to getting your video to go viral!

Nope, they don’t. The ones that end up making money don’t anyway.

Unless you’re a total bad ass who can monetise a weird dance and parlay that into fame and fortune you’re gonna need to plan this baby out.

So watch this video and then we’ll discuss the marketing strategy that gave this company 13 million video views and a $45 million a year business literally within a year.

Dollar Shave Club attacked the high-margin world of razors. They’ve used viral videos – almost exclusively – to attract and retain customers. I heard about DSC the way most men did, through a hysterical, irreverent video featuring the company’s co-founder, Michael Dubin, and decided it was worth the minimum $3 investment to check it out.

1) The Humble Twin, “Reliable; this is the ’82 wagon that starts when the temp’s below zero,” at three dollars per month (including shipping) for five blades

2) The 4X, “The Lover’s Blade,” six dollars per month for four blades.

3) The Executive, “The final frontier; it’s like a personal assistant for your face,” nine bucks for four blades

Per blade cartridge, that’s $.60 per Twin, $1.50 per 4X and $2.25 per Executive. To put those prices in perspective with comparable Gillette razors, my previous blade of choice, you’ll pay $2.30 per Sensor Excel cartridge, $2.90per Mach 3 Turbo and $3.62 per Fusion Proglide, premiums of 283%, 93% and 61% respectively. (The Gillette pricing comes via Amazon. It requires you to buy in higher quantities and may not include shipping and handling.)

So lesson No 1 is use humor

No 2 make sure your video is monetisable. 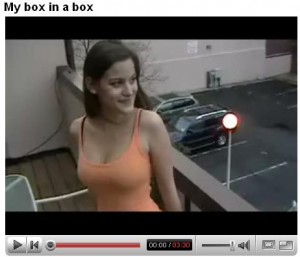 How To Make Your Videos Go Viral

Here’s a quick test. How would you finish this sentence?:

Fill in the blank. That’s your title.

Here’s a bad title: My year of working online.

Better: I Learned to market my business online in a Year.

Even better: Man Learns to be an internet entrepreneur in a Year.

Best: Guy Becomes A Millionaire in a Year (TIME LAPSE)

Upload On Monday or Tuesday

People watch YouTube videos when they’re at work. They read the news at work. Release your video on Monday or Tuesday to give it the whole week to gain momentum. Weekends are speed bumps.

I like Tuesday because people are busy catching up with email on Monday. You have to have people in a situation where they have the inclination to watch, SO, releasing on a slow news day will help you.

Mind your dates, too. Don’t release when people are not at the office (Christmas, bank holidays etc).

Your Video Must Actually Be Bad Ass

Why will people share your video? People share things when they feel emotion. What emotion will your viewers feel?

If you check out the Dollar Shave Club video above, you’ll see it tells a story too. Stories sell. BUT, more importantly, people want to share stories. Think about it, the natural way we’ve used for millennia to educate and pass on info is through stories.

It’s hard coded into our DNA.

People want stories. That’s what all TV, movies, and books are. Tell a story.

The first thing people do when they play a video is check to see how long it is. It helps them decide whether to watch it. 10 minutes: forget it. 2 minutes: I’ll give it a shot. 30 seconds: Heck, might as well.

Make your video as short as possible, while still keeping the heart of the story. Be ruthless with your editing, many, many tests show that short videos get more clicks and views.

Use Marketing To Get Traction.

Set and forget is a BAD idea for this – you have to be proactive.

Use social media as your first port of call. Paying for tweets from influencers is probably the easiest way to get traction.

Then you’ll want to use Facebook advertising to get video views using the new video campaign settings in Facebook.

I’ll do a post about that later, as there is MUCH money to be made with THAT!

So there you go, step by step to make your video go viral!

Now get shooting and uploading

P.S want us to make your video viral? Then check out our marketing services here