Every now and again I have one of those days/weeks where I just feel like shit, nothing goes right for me and I just want to say, screw it and head off to the beach and forget everything.

Ever have one of those days?

When I do, this is what I read… I hope you enjoy it as much as I have.

The Man Who Never Quit 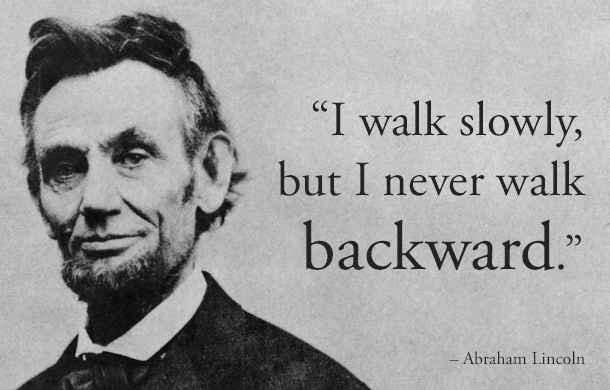 When he was seven years old, his family was forced out of their home and off their farm. Like other boys his age, he was expected to work to help support the family.

When he was nine, his mother died.

At the age of 22, the company he worked for went bankrupt and he lost his job.

At 23, he ran for state legislature in a field of 13 candidates. He came in eighth.

At 24, he borrowed money to start a business with a friend. By the end of the year, the business failed. The local sheriff seized his possessions to pay off his debt. His partner soon died, penniless, and he assumed his partner’s share of debt as well. He spent the next several years of his life paying it off.

At 25, he ran for state legislature again. This time he won.

At 26, he was engaged to be married. But his fiancée died before the wedding. The next year he plunged into a depression and suffered a nervous breakdown.

At 29, he sought to become the speaker of the state legislature. He was defeated.

At 34, he campaigned for a U.S. congressional seat, representing his district. He lost.

At 35, he ran for Congress again. This time he won. He went to Washington and did a good job.

At 39, when his term ended, he was out of a job again. There was a one-term-limit rule in his party.

At 40, he tried to get a job as commissioner of the General Land Office. He was rejected.

At 45, he campaigned for the U.S. Senate, representing his state. He lost by six electoral votes.

At 47, he was one of the contenders for the vice-presidential nomination at his party’s national convention. He lost.

At 49, he ran for the same U.S. Senate seat a second time. And for the second time, he lost.

Two years later, at the age of 51, after a lifetime of failure, disappointment, and loss (and still relatively unknown outside of his home state of Illinois), Abraham Lincoln was elected the sixteenth president of the United States.

The next time you consider giving up when faced with setback, consider this story. Imagine how the world would be different today if Lincoln gave up after his first setback … or his second … or his tenth.

If ever you feel like quitting remind yourself that those that do the things that inspire them in life have to first fail, and fail again.

Business, and indeed businesses, are the same. Your business will fail many many times before it works to its fullest.